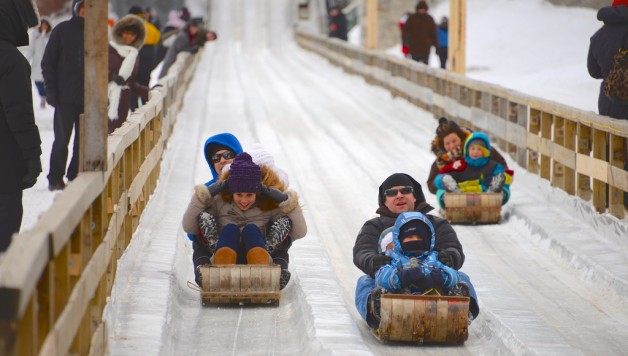 Québec City – My favourite short trip and why

This one was from my friend Chris, about a weekend trip to Quebec city.

In April 2012 my girlfriend and I wanted to go on yet another short trip. She lives in Vermont, USA, pretty close to the Canadian border. We had been to Montréal twice before and this time we were looking for a new place to go explore. We decided on Québec City, the capital of the French-speaking province of Québec. It was about a four-hour drive from Burlington, Vermont.

That region of the world isn’t particularly known for its warm and pleasant weather and when we were there in April, it still was cold for sure. That didn’t dampen our spirits though. We arrived around noon on Saturday. We checked into our hotel, threw our bags in our room and headed outside again. On the way out I picked up a nice little booklet on attractions and activities in the city. It listed a few city walks and we started our weekend in Québec by doing one of those.

It struck me right away that, despite having a population of over half a million, the historic city centre is actually very small. It has a distinct European feel to it, with its grey stone houses and cobbled streets. I loved it. Québec City is also the only remaining city with fortified city walls in North America. The cultural and historic value of Old Québec – or rather Vieux-Québec – is massive and it is in fact on UNESCO’s list of World Heritage Sites. We wanted to go for a walk on the city walls, which are supposed to offer nice views of the city, but because of the fact that the snow hasn’t melted yet, the walls were closed. We continued our walk past the Assemblée Nationale du Québec and other landmarks such as churches and cathedrals.
La Grande Allee is supposed to be the centre of Québecois nightlife and, of course, we went to check that out.

After visiting a couple of bars and having some drinks, we ended up dancing and drinking the night away in a great nightclub and got to know some Canadians. Travelling is also about meeting new people after all.
On Sunday morning we got up and noticed that it had started raining. After breakfast we headed outside anyway – you’re not in Od Québec every day, right? – and do some window shopping and souvenir buying. We impulsively decided to take a guided tour in a horse carriage in the afternoon. It can’t get more touristy than that, can it?

We liked it though and it was a nice and informative way to spend a rainy day in such a historic city. The only complaint I had was the expensiveness of that tour.

In late afternoon we jumped back in our car and made out way south to the Canadian-American border and towards Vermont. We didn’t even spend two full days in Québec City, but until now that still is my favorite short city break. I always love exploring and getting to know new cities and places, even if they are cold and rainy.